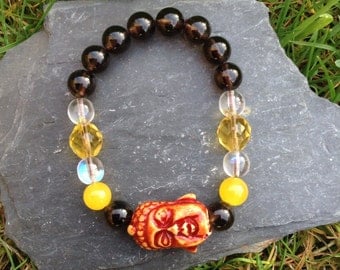 Lack of self-confidence or low self-esteem is not directly defined in the Buddhist tradition, but it would certainly be classified as a negative emotion or delusion, as it exaggerates one’s limitations in capacity, quality and potential for growth. Briefly put, every sentient being has the potential to become a fully perfected Buddha, if one does not understand this, one is deluded in this respect.

From “The Art of Happiness at Work” by His Holiness the Dalai Lama and Howard C. Cutler, M.D.

“…to have greater self-awareness or understanding means to have a better grasp of reality. Now, the opposite of reality is to project onto yourself qualities that are not there, ascribe to yourself characteristics in contrast to what is actually the case. For example, when you have a distorted view of yourself, such as through excessive pride or arrogance, because of these states of mind, you have an exaggerated sense of your qualities and personal abilities. Your view of your own abilities goes far beyond your actual abilities. On the other hand, when you have low self-esteem, then you underestimate your actual qualities and abilities. You belittle yourself, you put yourself down. This leads to a complete loss of faith in yourself. So excess–both in terms of exaggeration and devaluation–are equally destructive. lt is by addressing these obstacles and by constantly examining your personal character, qualities, and abilities, that you can learn to have greater self-understanding. This is the way to become more self-aware.”

A view from Shantideva:

“Self-confidence should be applied to wholesome actions,

Overcoming of delusions and my ability to overcome them.

Thinking, ‘I alone shall do it’

Is the self-confidence of action.”

Specifically in the Mahayana tradition of wishing to lead all sentient beings to enlightenment, it is important to have a healthy amount of self-confidence, self-esteem and self-respect to bring this vast task to a good end. Obviously, overconfidence and pride are at the other side of the scale and to be avoided.

His Holiness the 7th Dalai Lama in ‘Songs of spiritual change’ (translated by Glenn Mullin):

“Who has magnificent self-confidence

And fears nothing that exists?

The man who has attained to truth

And lives free of error.”

In my own words: ‘If a doctor would only focus on his fear for mistakes, how could he ever heal a patient?’

Do take a moment to let the next one sink in:

“No one can make you feel inferior without your permission.”

Not an easy one; take some time to dig deeper into yourself to answer why you allow others to make you feel inferior? Why don’t they feel inferior?

In Buddhism, in order to be cured from the problems in cyclic existence, we ourselves need to follow the instructions given by the Buddha with regard to the manner and frequency in taking his medicine, his daily diet and other relevant medical restraints. Likewise, we need to follow the precepts and advice given by the Buddha and control/subdue our greed, hatred and ignorance. No one can find salvation by simply singing praises of the Buddha or by making offerings to him. Neither does celebrating festivals in honour of the Buddha, mere prayer or begging lead to enlightenment. We need to strive hard by controlling our selfish desires and emotions in order to find a permanent solution to our problems.

“Human potential is the same for all. Your feeling, “I am of no value”, is wrong. Absolutely wrong. You are deceiving yourself. We all have the power of thought- so what are you lacking? If you have willpower, then you can change anything. It is usually said that you are your own master.”

Both quotes from His Holiness the Dalai Lama

This is even more so on the Mahayana path; if we seriously strive to make an end to the suffering of all sentient beings, we can’t expect to achieve that by fearfully ‘hiding in a corner’. Instead, it requires us to take confidence and courage in our own skills, and to work diligently for ourselves and others. See for an inspiring text, ‘the 37 Practices of a Bodhisattva’, and a commentary on that text by His Holiness the Dalai Lama.

Low self-esteem can actually be categorised as a form of laziness as explained by Ringu Tulku Rinpoche from Daring Steps Toward Fearlessness: The Three Vehicles of Buddhism:

“The Buddhist notion of diligence is to delight in positive deeds. Its opposite, called le lo in Tibetan, has three aspects. Le lo is usually translated as “laziness,” though only its first aspect refers to laziness as we usually understand it.

The first aspect is not doing something because of indolence, even though we know that it is good and ought to be done.

The second aspect is faintheartedness. This comes about when we underestimate our qualities and abilities, thinking, “I’m so incompetent and weak. It would be good to do that, but I could never accomplish it.” Not having the confidence of thinking, “I can do it,” we end up doing nothing.

The third aspect refers to being very busy and seeming diligent, but wasting time and energy on meaningless activities that will not accomplish anything in the long run. When we do many things for no real purpose, we fail to focus on what is truly worthwhile and our path has no clear direction.

When we refrain from these three aspects of laziness, we are diligent.”

So from this point of view, a lack of self-confidence can be like an excuse for ‘not-doing’ when something needs to be done, and is therefore clearly a problematic emotion.

Or, as Mahatma Gandhi said: “Fearlessness is the first requisite of spirituality. Cowards can never be moral.”

It can be difficult to accept others and to accept ourselves. “I should be better. I should be something different. I should have more.” All of this is conception; it’s all mental fabrication. It’s just the mind churning up “shoulds,” “ought tos,” and “supposed tos.” All this is conceptual rubbish, and yet we believe it. Part of the solution is to recognize that these thoughts are conceptual rubbish and not reality; this gives us the mental space not to believe them. When we stop believing them, it becomes much easier to accept what we are at any given moment, knowing we will change in the next moment. We’ll be able to accept what others are in one moment, knowing that they will be different in the next moment. This is good stuff for everyday practice; it’s very practical.

From How to Free Your Mind: Tara the Liberator by Thubten Chodron.

via Lack of Self-Confidence.

This entry was posted in Uncategorized and tagged Buddhism, Self-confidence, Self-esteem. Bookmark the permalink.