Intimidation – the waterboarding of business 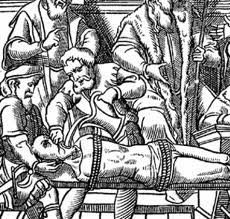 Intimidation is the waterboarding of business. It is a tactic that creates an artificial fear that something bad might happen.  Let’s face it: Intimidation is a fact of life. It joins death and taxes as one of the few certainties in life. If someone tells you they have never been intimidated by someone or something, they are lying to you because they are too intimidated to admit it.

Like a Stephen King horror story, intimidation comes at us in many forms and faces. As long as intimidation is going to be part of our lives, we might as well learn how to deal with it, resist it, and even use it. The key to doing this is to understand the dynamics of intimidation and the motivation of those who attempt to wield it. If we do, it can never inhibit our actions and control us.

Intimidation comes at us from many quarters – parents, teachers, schoolmates and even churches – but the workplace is where we are most likely to be fed a steady diet of The Big I. The typical business environment is an out-and-out incubator for intimidation. The use of power, authority, position and status to intimidate workers into compliance is, at many companies, considered to be one of the most effective of management’s bag of coercive tools. Respect for authority, position and status is fine, but using them to intimidate others into submissive acquiescence is quite another thing.

Intimidation in the workplace can be blunt and blatant or it can be subtle and surreptitious. The question is not whether we will face intimidation – we will – but how we will confront it. Finding the right approach to neutralizing intimidation may at times seem counterintuitive, but it is important to do so. Knowing how to react to what, in essence, is bullying will go a long way toward determining just who or what will control our lives and our careers.

The natural inclination to workplace intimidation is to be cowed and fearful, but that is the wrong reaction because it fails to differentiate between real fear and the feeling of intimidation. Fear is a natural and primordial reaction that is intended to warn us that the threat of bodily injury, for example, is imminent. For example, when a pack of street thugs hold you at gun point in a dark alley. Intimidation, on the other hand, is a tactic used by a weak management to create an artificial aura of fear that something bad might happen. And the problem is that fear stimulated by workplace intimidation robs its victim employees of their ability to perform at peak levels.

For this reason, intimidation used as a tool of management is counterproductive and destructive. Intimidation cowers the employee in a way that limits their ability to act independently, resulting in wasted time, talent and creative opportunity. The idea that you can command people to do things because they’re afraid of you makes the use of intimidation a pretty tempting commodity for the weak and insecure manager. The problem is that intimidation never gets the best out of people. In fact, this approach is the antithesis of effective leadership and detrimental to any hope of achieving success.

Those who suffer from the application of workplace intimidation become overly fearful of offering their ideas or sharing their concern. (Ever had that feeling?) They are wary of taking the initiative and, accordingly, their doubts become self-fulfilling. Even worse, those who succumb to intimidation become little more than frustrated drones, mindlessly carrying out a sort of genetic blueprint drawn by the intimidating figure from on high. It is sad to see how many people suffer through their entire business career intimidated by the bullying of others, in a way that causes them to fear any attempt to do what they dream to do; and instead are forced to play by the rules of others. In the words of Shakespeare: “Our doubts are traitors that make us lose the good we oft might win by fearing to attempt.”

When it comes time to face the demons of intimidation – and it will happen – you will be well served by recognizing intimidation for what it is and by exhibiting a confidence that will never allow it to consume you and your career. This may not be easy (actually it is), but it is the only way to avoid the feeling of being chained to an oar of a slave-galley; otherwise known as the corporate world.

Over 45 years of business experience gave me a front row seat to observe all the tricks and treats of intimidation in business. From that experience, one observation clearly stands out: Those who consistently use their position or power in an organization to intimidate others do so in response to their own inner anxieties of insecurity, weakness and fear of being exposed as incompetent. This type of manager uses intimidation as a defense mechanism and protective moat intended to prevent workers from breaching their wall of insecurity.

So the first step to dealing with intimidation in the workplace is to recognize that it is thrust upon us from a sense of insecurity and weakness, rather than confidence and strength. Once we recognize the purpose of intimidation, we are well on our way to thwarting its impact. This understanding gives us the power to rise above the situation and turn it against the intimidator. Think of it in terms of reverse intimidation. This is the embodiment of the old saying, “Fight fire with fire!” That is, creating a “back-draft” that turns the intimidation back on the intimidator.

Like a mirror used to reflect and increase the power of the sun, intimidation reflected back on intimidator magnifies its impact. The person who consciously uses intimidation in an effort to gain control is like the schoolyard bully. He will keep pushing so long as he thinks he can get away with such action. On the other hand, as soon as the intimidator realizes you will not be intimidated, then the whole relationship will change.

There is a revealing scene in the movie Zero Dark Thirty when Maya (Jessica Chastain), who is a junior member of a team of CIA operatives, charged with finding Osama bin Laden, stands up to her boss. Constantly intimidated by reminders of zero-dark-thirty-2012-img02her low position on the team, lack of experience, the power of the system and a “station chief” more concerned with his resume and fear of failure than accomplishing the objective, Maya finally takes a stand. Using his insecurities and ambitions against him, Maya reflects the intimidation back at her boss, and he backs down. From that time forward Maya is treated with respect and her ideas are taken seriously, ultimately resulting in finally tracking down OBL.

This is not to suggest that how we deal with intimidation in the workplace will be as dramatic and impactful, but it will be for us and our future. At the very least, understanding intimidation and the motivation for some to use it will enable us to better deal with it. But we can actually do more than that. We can use the understanding of motivation to intimidate the intimidator; exorcising it from our lives and allowing us the freedom to achieve all that we have the potential to achieve.

And the moral of the story …

Intimidation sucks! It creates an artificial feeling of fear that inhibits its victims from performing to their potential. But intimidation is a cold fact of life – especially in the workplace – that can only be conquered when confronted. The way to neutralize the impact of intimidation is to understand it and recognize why it is being used. When we identify intimidation as a desperate tactic of a weak and insecure manager, it loses its fearsome influence and can, in fact, be used against the intimidator to nullify it.

The truth is that only by understanding intimidation and identifying its purpose and then turning it back on itself, will we be truly free from its impact and influences on our performance. When we conjure up the vision of the business intimidator as nothing more than a schoolyard bully and comprehend that the only way to stop them is to stand up to them, we will have discovered the only antidote to intimidation.

via The Best Antidote for Intimidation is to Intimidate the Intimidator.

This entry was posted in Uncategorized and tagged intimidation, Intimidation in the workplace. Bookmark the permalink.